Why do you have to be so mean?

This week I have come across what can only described as 'hatred' for people with Borderline Personality Disorder. It shocked me. Don't get me wrong, years ago, before I was diagnosed with BPD, I used to work in the Criminal Justice System, and my specialism was Mentally Disordered Offenders, the majority of whom were diagnosed with some form of Personality Disorder.So, I was aware of negative attitudes to people with Mental Illnesses, and in particular, those with diagnoses of PD. 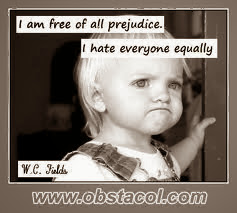 My colleagues used to groan if case notes included the dreaded BPD diagnosis. 1) because people with BPD are 'difficult' 2) because at the time, BPD was considered 'untreatable' by local NHS Trusts and refused to admit even suicidal cases 3) because there was a high likelihood of suicide/self harm from this 'group'. In short I believe BPD sufferers as a group have received and continue to receive a bad press from a number of sources.

I found that being consistent and listening closely to what was being said to me, often helped me to manage my cases, in other words: compassionately treating people, regardless of labels, as if they were human beings seemed to work. (not rocket science is it?)

Anyway, back to the guy who has obviously had a bad relationship with someone with BPD. His take was that BPD doesn't deserve to be treated as a mental illness, but is just down us being some kind of 'crazy ass' (his words). He even managed to intimate that the abusive backgrounds of a large number of people with BPD was actually the fault of the victims. Initially I felt defensive of myself and others who have suffered from what some describe as 'emotional sensitivity' rather than BPD. Then I considered that perhaps, following a messy break up (I've been involved in my fair share of those!) his anger was robbing him of his humanity. Which is understandable. 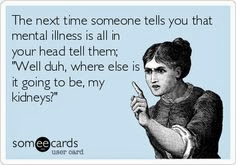 How do I respond to his point that I'm just an emotional mess? That I do not deserve treatment? Well, I think that I would point him to Marsha Linehan's (the creator of Dialectical Behaviour Therapy for BPD) explanation of BPD as equivalent to suffering 3rd degree burns.

Imagine suffering emotional and psychological pain that is so deep and so painful that the only solution you can think of is either to inflict physical pain to distract from it, or to believe that dying is the only way to stop it? Does that sound like something that you could sustain while maintaining a functional life? Yet many sufferers of BPD do manage to do just that, while holding down very respectable jobs and being creative and dynamic in certain spheres. This 'apparent competence' in certain spheres, my BPD-hating 'friend' points out as proof that BPD is made up by selfish women seeking to justify messy love lives and as an excuse to be nasty to men.

I think at this point we can recognise the ignorance and stigma evidenced here towards Mental illness in general. I mean you can't possibly run a country with a severely debilitating clinical depression, can you? Winston Churchill, anyone? Just because my professionalism and training allow me to carry out a job from 9-5 does not mean that the emotional distress I am experiencing is not real and does not have an impact on my mental and physical health. 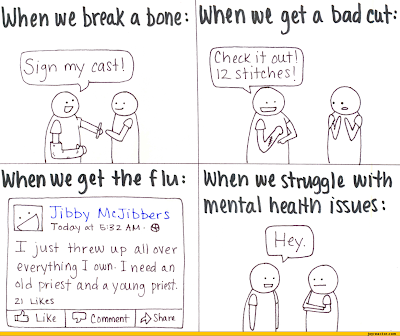 If I may, I need to return to the burns analogy, even when time allows a skin to grow over the burned area, there remains a sensitivity that often never leaves. The levels of abuse I suffered as a child have left me with emotional and psychological scars. My diagnosis whilst not perfect, has allowed me to access help to develop skills which mean that I no longer consider death to be a solution. My treatment means that I am able to begin to 'function' again, after a complete breakdown two years ago.

I am responsible for the people I may have hurt throughout my life. I would say, though, if you rip the dressing off a burns victim, you can expect a strong reaction! My plea is: try to listen, try to understand, try to give space, and, if you think you are too angry or too hurt to see the human behind the label, make it a clean break.

When the Fight is too much - Stop Fighting

I'm a fighter. Some would say I'm stubborn, obstinate, belligerent. Others might use words like, determined, resourceful, persistent... 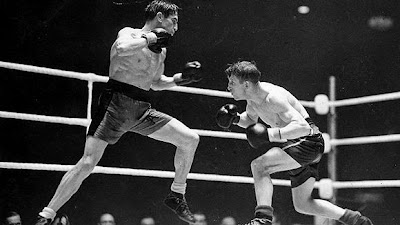 Alma Johnston
I previously worked first as a Teacher of English and Drama, then as a Probation Officer. I took Voluntary Redundancy. I had suffered from Depression and stress related mental health issues until the age of 42 when I was diagnosed with Borderline Personality Disorder (now referred to as Emotionally Sensitive PD). I was lucky to be offered a full DBT therapy for nearly two years by @LCFT and I manage my condition using the skills I have learned. This blog is based on my story of Recovery (and Relapse in 2017) and Recovery and what has helped me. I want to focus on hope. In 2012 I started a Mental Health group and wellbeing course. All of Us is a community based mental health and well-being group. The principles of the group are based on providing hope and meaning and aims to help group members identify what a life worth living means to them, and then to support them in working towards achieving it. Our facebook page can be found at All of Us in Buckshaw and we have a twitter account at @allofusbuckshaw or @AEJ1967 We can be contacted by direct message on facebook or twitter or by emailing us